COVID-19 UPDATE: Unsurprisingly all events for the immediate future where we were due to dance have now been cancelled, but we have been re-booked for 2021! 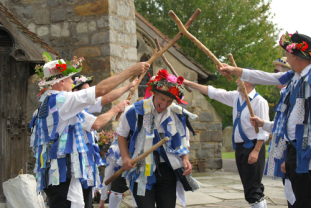 We dance locally at fetes, shows and the occasional socal event to raise money for Chobham St Lawrence Primary School, which has, over the years, provided first educational steps for our children and even some of the dancers -  our youngest dancer is still a pupil at the school!

We still have a number of of dancers who have been with us since the beginning (of time?) and we have gradually expanded our repertoire since those early days. We have appeared in TV adverts (for GiffGaff) and series (Trinny and Susannah) and have also performed a Mummers Play in recent years at various local hostelries, raising money for Woking Hospice. 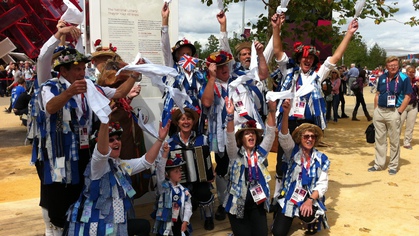 Who knows where the time goes?

This would have been our 35th year of dancing!

And hopefully we will be able to do so before the season ends. We may have to create a new 'social distancing' dance to comply with current regulations, or find a way to dance virtually.

Of course many of the early season Future Dates arranged for this year have been cancelled but many have already booked us for next year! Thank you, we look  forward to seeing you then. However, we hope some of the ones later in the year are still able to go ahead - if your event is not listed yet then get in touch!

Whilst there is now no possibility of a 35th Anniversary tour to Sweden in the summer, we will just have to remember our tours to France, Sweden (twice - when will they ever learn...?) and Spain in the past. We even had the honour of dancing as 'Official Entertainers' on the Olympic site during the fantasic summer of 2012! 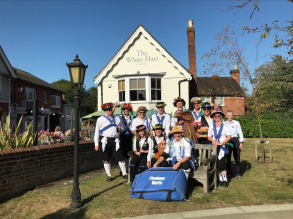 We are delighted that our sponsor for the 2020 season is once again our favourite watering hole in the centre of our village, the White Hart. With a regularly changing range of real ales, (or should we call them craft beers these days...?) great food and fantastic company, what's not to like?

See you at the bar!